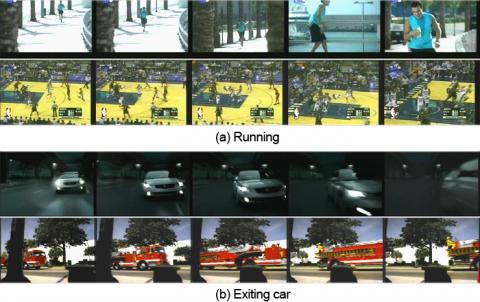 The recognition of events in videos is a relevant and challenging task of automatic semantic video analysis. At present one of the most successful frameworks, used for object recognition tasks, is the bag-of-words (BoW) approach. However it does not model the temporal information of the video stream. We are working at a novel method  to introduce temporal information within the BoW approach by modeling a video clip as a sequence of histograms of visual features, computed from each frame using the traditional BoW model.

The sequences are treated as strings where each histogram is considered as a character. Event classification of these sequences of variable size, depending on the length of the video clip, are performed using SVM classifiers with a string kernel (e.g using the Needlemann-Wunsch edit distance). Experimental results, performed on two domains, soccer video and TRECVID 2005, demonstrate the validity of the proposed approach.