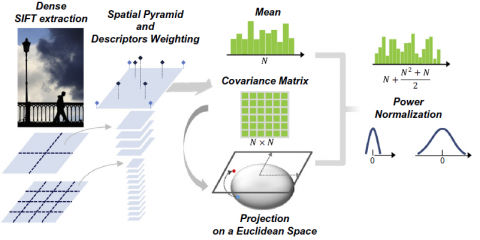 The Bag of Words paradigm has been the baseline from which several successful image classification solutions were developed in the last decade. These represent images by quantizing local descriptors and summarizing their distribution. The quantization step introduces a dependency on the dataset, that even if in some contexts significantly boosts the performance, severely limits its generalization capabilities. Differently, in this paper, we propose to model the local features distribution with a multivariate Gaussian, without any quantization. The full rank covariance matrix, which lies on a Riemannian manifold, is projected on the tangent Euclidean space and concatenated to the mean vector. The resulting representation, a Gaussian of Local Descriptors (GOLD), allows to use the dot product to closely approximate a distance between distributions without the need for expensive kernel computations. We describe an image by an improved spatial pyramid, which avoids boundary effects with soft assignment: local descriptors contribute to neighboring Gaussians, forming a weighted spatial pyramid of GOLD descriptors. In […]